As you know from my last post, I'm a fan of pinup art. 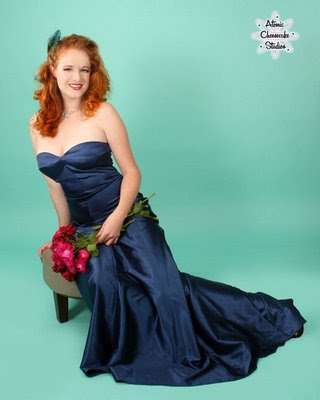 As my husband's birthday was approaching, I decided that it would be a cool gift to have some vintage pinup photos of myself taken. So after a quick Google search that took me to a recent City Paper article, I found out about Stacey Barich, the woman who owns Atomic Cheesecake Studios http://www.atomiccheesecakestudios.com/) in Baltimore. She specializes in classic pin-up photo shoots.

A few phone calls, e-mails, and about a month later, I was in her photo studio, trying on vintage clothing (she has a very impressive collection). Stacey also did my hair and makeup for the shoot. I found her to be professional, sweet, and easy to talk to—this transformation look a little while! But I was having so much fun being dolled up into a 1950's Hollywood starlet.

Just this past week, I received my CD of photos from the shoot. I am so impressed by the quality of her photography work that I just felt I needed to post one here. I was also impressed by how reasonably priced her work is! Let's just say, my hubby was thrilled and I would recommend her to anyone.

Can you tell which image inspired my photo?