Go Local: Relying on our Baltimoreans

With the economy, companies are relying on locals to keep their businesses alive. Companies do this by associating iconic figures to their sought out locations, not only relating locals to the figures but also to the brand.

Now even major names are going back to their roots to identify with their consumers. Perfect example is Under Armour, which was founded by the former University of Maryland football player Kevin Plank. Under Armour recently has been advertising directly to Baltimore. They have the Raven's linebacker Ray Lewis being their spokes person. On I-95 they have a billboard of Ray Lewis saying, “Welcome to Baltimore.”

M&T Bank started the ad campaign, “Checking Built for Baltimore.” Here it shows Todd Heap, tight end for the Baltimore Ravens. Heap has it so why don’t you?

Baltimore Magazine features “When Oprah Was Ours” article, Jane Marion further explains how Baltimore’s WJZ-TV hired Oprah Winfrey in 1976 and was essentially the stepping stone to what is known as “Oprah.” 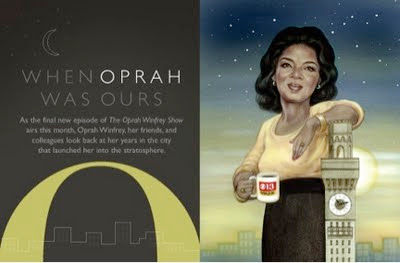 Probably the most well-known billboard in Baltimore, or even Maryland is Smyth Jewelers’ 2007 Where Baltimore gets engaged billboard, in which Natty Boh is proposing to the Miss Utz. Smyth Jewelers definitely reached their goal with the billboard by attracting the “20 somethings” into purchasing their diamonds, a 15% increase in their sales, and being the talk of Baltimore.

The billboard was such a hit that the advertising agency, MGH, who created it, organized the iconic marriage for the two that was held on May 14th at Power Plant Live! and created a TV commercial using the couple’s long lasting romance as well. 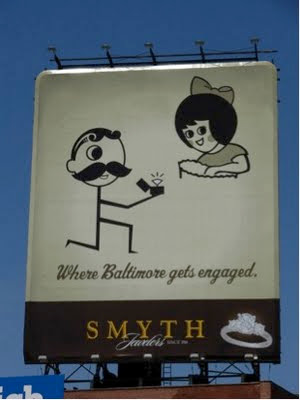 Where love not only exists on billboards, but also advertising.