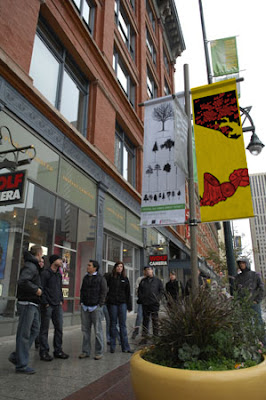 WAAAAY back in 2008, CurlyRed was part of the Urban Forest Project, and this work still holds a special place in our hearts.

The Urban Forest Project was a national exhibition working in conjunction with the Times Square Alliance and World Studio in NYC, put on by Tilt Studios. The project brought together 200 artists, designers and College students, 75+ K-12 students, and another 100+ businesses to produce a visual story based on the image of a tree and the idea of sustainability. Each participant was asked to design a banner, to be hung throughout Baltimore City. The banners were located in Druid Hill Park, Wyman Park Dell, Herring Run Park, Patterson Park and Carroll Park.

After the closing, the banners were recycled into tote bags and sold as original works of functional art. All proceeds from the project will benefit the Baltimore City Department of Recreation & Parks Tree Baltimore Campaign for a greener city.

Here's the statement of purpose Kendall submitted for consideration to be part of the “Urban Forest Project.” (written in December of 2007):
“Three months ago, an acquaintance of mine, Zach Sowers was walking from Canton to his home in Patterson Park. Four men pulled up in a car, two of them jumped out, and asked Zach for a cigarette. He said he didn't have one, then one man proceeded to take his wallet, and then beat him beyond recognition while the other three watched. He is still in a coma today, and his wife has been active in speaking in the community and raising awareness about what happened to Zach. You can read about their story and his progress at www.zachsowers.com.

I had the honor of designing the t-shirt that is being sold to help pay his medical bills and raise awareness of the growing problem in this city. But as the crime rate continues to soar, it feels like the message is still getting lost.

I was inspired by Zach to create a poster to express my unhappiness with the growing rate of crime (mostly murder) in Baltimore. Anna Ditkoff, a writer for the City Paper, has created a map that

pinpoints each murder that has occurred since the beginning of 2007. Viewing this map for the first time was a powerful and disturbing experience, and one that each resident of not only the city, but the whole state needs to see.

An equally powerful image is one of a tree that's been cut down. To some, it might represent possibility made by paper or economic development. But to many, it symbolizes waste, pollution and deforestation.

So here's my poster concept: The poster is a graphic map of Baltimore city. Where each murder this year (to date: 271) has taken place, I will show an icon of a cut-down tree. Even though the trees overlap, there are exactly 271 trees on the map. Underneath, a large image of the cut-down tree will be shown as a visual reference for the viewer. The illustration was created with the help of my husband, Mark Ludwig.

This way the poster has a double-meaning: Baltimore is currently a wasteful and violent place. My hope is that this poster would inspire its viewers to do their part to lower the crime and murder rates in the city.”

It's a powerful message that sadly still needs to be told. But we still have faith in the city Baltimore can be, and will continue to do our part to make our home more peaceful.