It's the end of an era! Hope you'll join us!

We've had the pleasure of being part of am amazing (and free) networking group called B'More Creatives, since the very beginning. M. Kendall Ludwig, president and principal designer of CurlyRed, was also had the honor of serving on the board of directors for the past 5 or 6 years. But Kendall, along with fellow leader Jessica Watson of Points North Studio, had come to the difficult decision to close this group at the end of the year.

Jessica wrote a beautiful note about our decision behind closing this group:

[B'More Creatives was] established at a time when other creative groups were not very active. Professionals and students in our industry were hungry for ways to connect. Over the years we’ve hosted countless networking events, seminars, educational panels, a mentor program and more. I’ve had the pleasure of working with some very dedicated board members and advisors who helped bring these ideas into fruition.

But, by being involved for this long, I’ve also seen the way the tides are changing. For example, we started losing sponsor funding in 2013 and never fully recovered. We could’ve closed then, but instead we wrangled new ways to keep us running. Also, other professional groups in the creative space have become remarkably active over time. We’re all vying for the same audience. Lastly, we’ve lost good board members over the years (this is normal as members complete their terms) and were unable to secure a strong plan for the future of the group.

The decision to close was not an easy one; we had several conversations internally before announcing this to the public. But, I do not view closing as a bad thing. I think it’s a strong indicator of the pulse and vitality of the creative community in Baltimore, that many individuals and groups are thriving. We have forever left a mark on this city and we don’t discount the value we’ve had in helping each other grow.

We are working on a contingency plan for those who want to continue the conversation and stay connected beyond Dec. 31st.

B’More Creatives is not a group that fizzles and fades away. You won’t wonder “whatever happened to....?” We will go out with as much passion and intention as when we started, and we hope you’ll celebrate our legacy with us.” 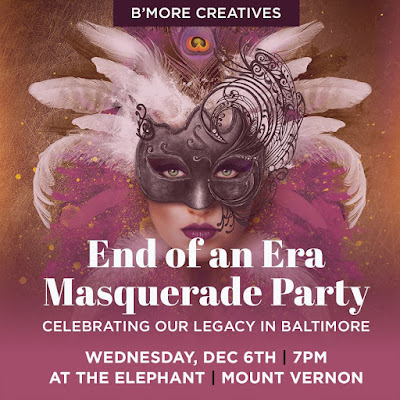 Jessica and I (along with our board) have decided to throw a huge, Masquerade-style celebration at The Elephant in Mt. Vernon to celebrate this incredible group and what it's meant to the design community in Baltimore. I hope you can all make it on Dec. 6th at 7pm.