Things that are true about acting AND business

Tonight is opening night for a production called Almost, Maine at the quaint playhouse Our Town Theatre in Oakland, Maryland. We're even featured on the cover of the local newspaper! 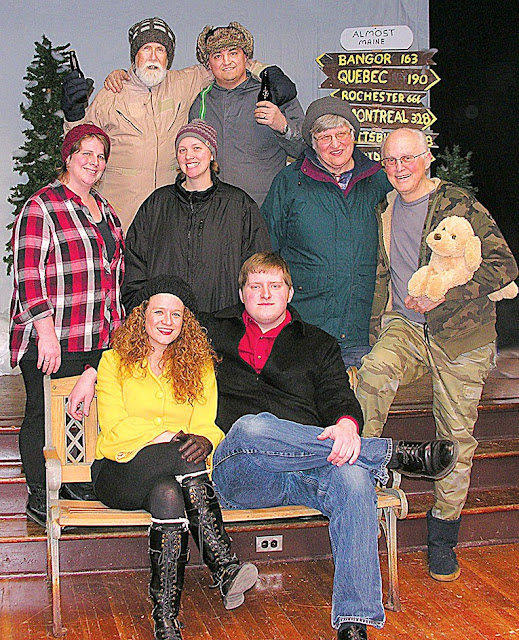 photo courtesy of Our Town Theatre (I'm on the bottom left!)

A few months ago, notices for open auditions came across my social media stream, and I thought, “Wow. It's been ages (6 years, give or take) since I've been on-stage. I miss it. Maybe it would be good for me, to meet some new people in this new town, and give me something to do on these cold winter evenings.” And that was the extent of my thought process before walking into auditions. 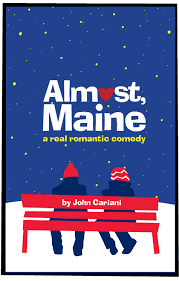 In the past 6 weeks, I feel like I've learned so much about acting as a craft. Then I began wondering how much of what I've learned on-stage translates to running a business. Here are some things that are true about both acting AND business:
1. Humility is key.
This is my first attempt at performing in a non-musical, which meant that I really did have a ton to learn: pages of lines to memorize, working on facial expressions, learning to convey and shift from one emotion to another, learning how to make dialogue with another actor flow easily and naturally, and so on. It would have been easy for me to waltz into that first rehearsal with a huge ego given my past experience, but that wouldn't have served me, my director, or my fellow cast members at all. So I tried to keep my mouth shut, ears open, and asked for feedback regularly.

2. Unbiased opinions can be game-changing.
My mom (who has directed theatre in the past) was in town, and I asked her to come to one of our rehearsals, when we were running through my toughest scene. This particular scene has the largest range of emotions, going from sadness to irritation to full-on rage. I was completely unsure of how to approach this scene. But right after rehearsal, my mom was able to give me verbal cues and moments to watch for, and even helped form an overall trajectory in my mind from where I needed to start emotionally and where I needed to end. Her comments were immensely helpful, and I'm extremely grateful she was there.

3. Building relationships and trust take time and consistency.
I knew no one in the cast or crew at that first practice. No one knew me or my story. This was in some ways refreshing, but also daunting, considering how intimate acting can be. I needed to gain the trust of my cast, espeically my co-star Cory, with whom I share all 3 of my scenes. This required asking questions, being open and transparent about my own life, making the occasional silly comments, and simply trying my best to be kind and considerate. Now I think of everyone in the cast and crew as a friend of mine, and what a blessing that is.

4. Practice doesn't make perfect, but it does build strength.
Learning my lines was WAY more difficult than I imagined it would be. Perhaps that's because I'm 35, or just out of practice. But the only way I was going to become confident in knowing my part inside and out was hours and hours of practice. There's no shortcut, but now that I've completed the hard work, my roles have become almost muscle memory—I no longer have to panic about what line comes next, it's just there, waiting for me.

5. It's all about listening and genuinely reacting.
This was what makes a good actor. Knowing my lines was essential, but then as soon as I did, I needed to “forget” my co-star's lines. I need to pretend like I have no idea what he's going to say or do next, and instead, really listen and react to what he's saying as if it's for the very first time. Man, it's so hard. And yet, that's what the authenticity comes in. My ultimate hope is that what I do on-stage will be so believable, that for a moment the audience will forget that they are watching me, and only see the characters I play. 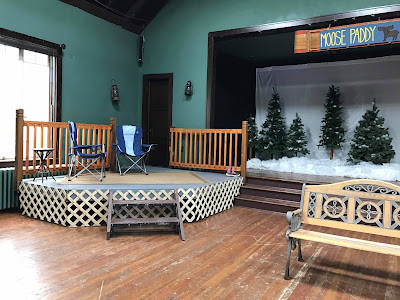 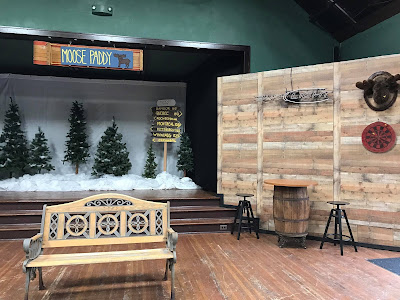 Set for Almost, Maine | photo courtesy of Our Town Theatre

In my 10 years of running CurlyRed, I've seen so many of these things to be true about owning a business as well. Humility and willingness to receiving feedback from others is essential to my growth. Building relationships the right way has served me very well. Practicing my craft keeps me on top of my game. And really listening and reacting with integrity helps me do my best work for my clients. For those who are in the Western Maryland area, please come out and see me do some serious acting! Reservations can be made here.